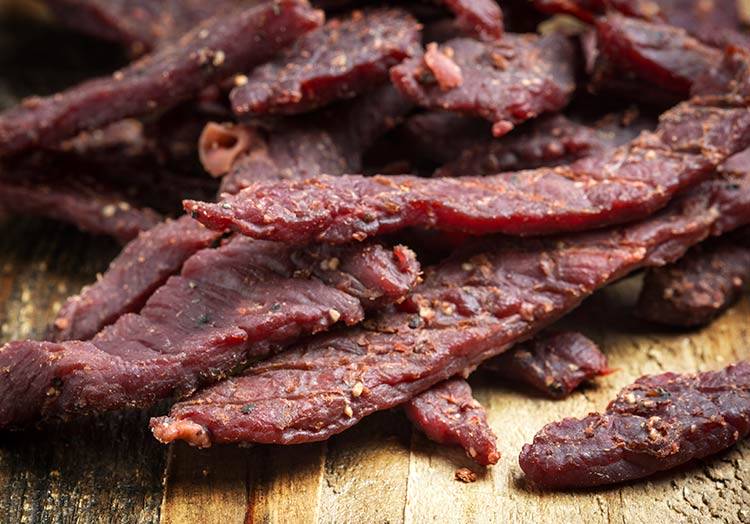 Just how important was jerky to the Oregon Trail Pioneer?

Jerky had several benefits for for the Oregon Trail Pioneer.  First and foremost, jerky weighed less than fresh meat. When you can only carry so much weight on your wagon everything must be considered.  Secondly, jerky was a quick source of protein that could feed a family while walking along the trail. It made a quick lunch if the wagon train couldn't stop to make a fire and cook something.  It was great for moms on the trail who had walked all day and just didn't feel like cooking something.  Dried fruit, biscuits and jerky were filling. The third reason pioneers would dry meat was when there was plenty you always "put some by" for leaner times.  If the wagon train killed a buffalo, it could produce up to 450 pounds of meat.  The remaining meat was dried and stored.

Many believe the Native American people had been making jerky for centuries and others believe an Inca tribe by the name of Cj'arki started making dried meats in the 1500's.

When the first Europeans arrived in the New World, they found that the Natives were making a dried meat product that did not need to be consumed immediately and they instantly know that jerky would be beneficial to them. What the Native American tribes called "pemmican" was jerky meat added to either crushed dried fruit or animal fat.  The Native Americans taught the settlers how to cut and prepare the meat into long strips and later shared with them the  entire jerky-making process and some variations of seasonings to make different recipes.

With this newfound knowledge and time-tested recipes the European pioneers found themselves cooking and consuming jerky more than ever before. It was definitely the snack of choice. Jerky reached its height of popularity during the Westward Migration where traders and explorers prized it as an essential source of nutrition as they traveled to new areas with limited accessibility to fresh food and supplies along the way. The fact that meat could be hunted anywhere along the trails that the settlers were following to the West made this method of preparing meat a very valuable skill.