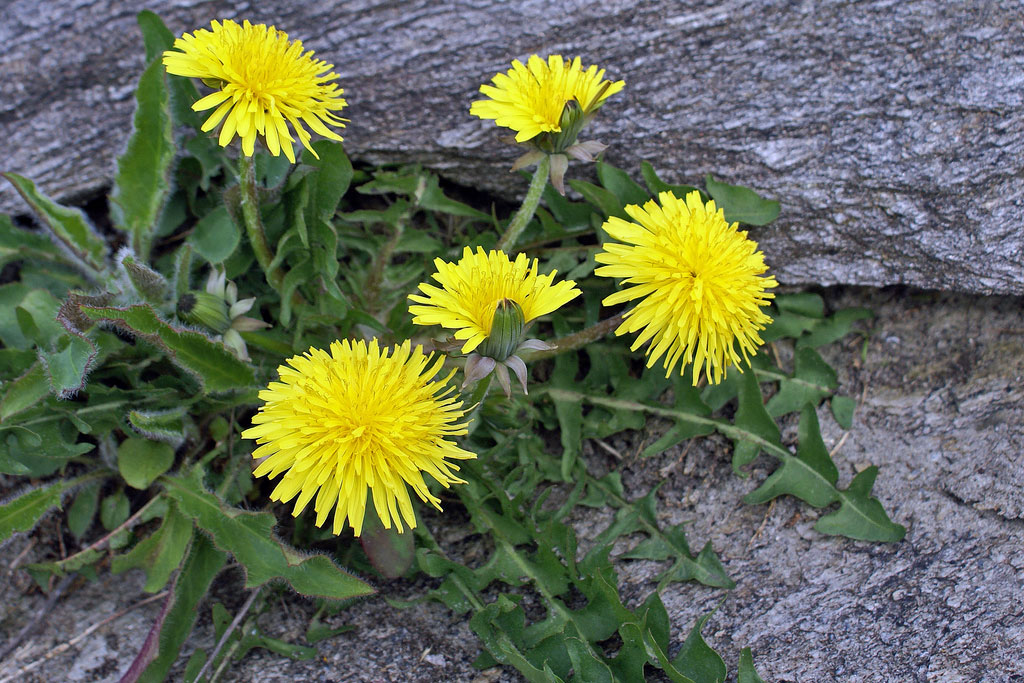 Volumes could be written on the many uses of dandelion as food and medicine, indeed they have been! This common weed is often hated and poisoned by those preferring a “weed free” lawn, while those of us in love with dandelion and its many uses happily support it taking over our lawns.

The Dandelion is native to Europe and Asia, but since it was deliberately carried from place to place for cultivation it has naturalized throughout the temperate regions of the world.

As a potherb the plant became popular in Europe and America during the nineteenth century. During World War II the roasted, ground taproots were used as a coffee substitute and the bright yellow flower petals were chopped and added to spreads to simulate the color of butter.

The dandelion is one of the first wild perennials to appear in spring. The pioneers would have had plenty of this nutritional herb all along the trail. Toothed leaves grow from a thick taproot which often reaches two feet in length. The yellow, pollen-laden flowers appear a few weeks after the first leaves have developed. The solitary blossoms growing on hollow stems exude a milky juice when picked and the flowers mature to a fluffy, down-like puff ball. The round seed head contains a cluster of as many as two hundred narrow seeds each bearing a parachute of hairs at the apex.

Dandelion leaves are best gathered when young before the flower buds develop. As the plant matures the leaves take on an unpleasant bitter taste due to the glycosides. The best salad greens are found in areas unexposed to bright sunlight. These are lighter in color and have a milder flavor. Some people cover developing young Dandelions with cardboard or paper bags for five to seven days to assure an abundance of bleached Dandelion salad greens.

The greens are more nutritious than spinach. They contain vitamin A, one of the vitamin B complex, vitamin C, vitamin D, calcium, potassium and iron. As an added bonus, the leaves contain photosterols which prevent the body from accumulating cholesterols. Parts of the Dandelion can be harvested from early spring to late autumn.

During the early spring, the entire plant may be pulled up exposing the long taproot. The outer leaves can then be stripped away and the heart of the plant severed from the root. This tender heart can be used in omelets or  cooked with the young leaves as a vegetable. The root can be scrubbed clean, roasted, and ground to be used as a coffee substitute.

During late spring or early summer mature leaves can be gathered , bundled with light string, and hung in a warm dry place to dry. Once the leaves have dried, crumble them and store the herb in tightly covered containers. This makes a good substitute for tea by steeping two teaspoons of dried leaves in a cup of boiling hot water.

The blossoms which are most abundant in may also produce a valuable wild food. The petals can be picked rom the green flower base and used in biscuits, muffins, wine and jelly. These petals are best gathered in the early afternoon hours while the flowers are in full bloom (they close on cloudy days and at night). The flavor and freshness of the petals are at their best when used within three to fours of harvesting.

During late autumn, Dandelion taproots may be dug and planted in a wooden crate of prepared soil. The crate can be stored in a basement root cellar or other cool dark place. With regular watering, the roots will produce a good supply of tender blanched leaves throughout the winter.

The following are a couple of recipes the pioneers might have brought from home and used on the trail.

Cut roots into 1/2 inch sections. Place in single layer on a cookie sheet and dry in 225 degree oven for 4 to 5 ours or until roots are brittle and brown inside. Store in tightly covered container. Grind as needed and brew using 1/4 less Dandelion coffee as you would regular coffee.